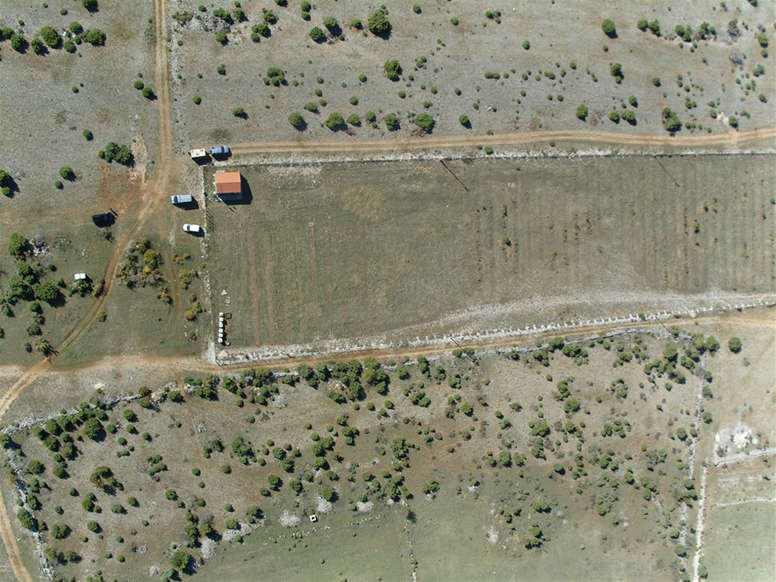 Mechanical workshop: Not at the test site, but this service may be provided upon request.

Introduction
The test site and equipment are the property of HCR-CTRO d.o.o.

Test lanes/areas
The test site is divided into 47 lanes.

1. Blind test lanes (39)  47 m long, 1 m wide, mines are buried at 5-27 cm deep. Distance between the lanes is 3 m. The lanes are divided into 1×1 m squares, their furthermost points are marked. The distance of 3 m between the lanes is sufficient to prevent interference from objects in the neighbouring lanes and to enable passage of a vehicle. There is a 3 m wide area along the fence, and 8 m wide area at the entrance, where the office facility is placed and where preparation and training is conducted.

Weather conditions enable the use of the test site all the year round. There is almost no snow or frost, and the rains are rare.

Targets
In the area intended for blind tests there are 810 mines, 449 false alarm objects and 457 empty spaces.

Other types of mines may be provided on users request.

Supporting equipment
There is a weather station at the test site

Security
The test site is protected with a fence and there is a 24 hours a day alarm system.

Past, ongoing and planned tests and trials

Past tests
– Reliability tests of metal detectors, carried out by BAM (Federal Institute for Materials Research and Testing – Germany) in 2003 and 2005.
– Demonstration of the work of CEIA metal detectors, carried out upon the request by AKD Mungos company.
– testing of technical performance of metal detectors used by CROMAC.
– in February and March 2006, testing of Japanese robotic buggies and mine detection dual sensors ((Mine Hunter Vehicle -MHV1 i MHV-2, Gryphon, ALIS)
– in September 2006, STEMD project – systematic test and evaluation of metal detectors used in the region of southeast Europe, carried out in collaboration with BAM (German Federal Institute for Material Research and Testing)
– in October 2006, testing of a mine detection scanner in collaboration with Fraunhofer Institute from Germany, as part of the HUMIN/MD project.
– in October 2007, testing of Japanese dual sensor systems ALIS (Advanced Landmine Imaging System) i Gryphon + LAMDAR IV
– in 2009 – use of bees in mine detection – passive method – sampling from the beehives.
– from 2012-2014 – TIRAMISU project within the EU FP7
– from 2014-2018 – trials by Manchester University
– 2016-2019 – trials by St. Andrews University
– 2018 – 2019 – Faculty of Electrical Engineering and Computing, University of Zagreb – R&D of metal detectors, field trials
– 2019 – SeaTerra GmbH – itesting of a drone survey system

We use cookies on our website to give you the most relevant experience by remembering your preferences and repeat visits. By clicking “Accept”, you consent to the use of ALL the cookies.
Read MoreACCEPT
Manage consent

This website uses cookies to improve your experience while you navigate through the website. Out of these, the cookies that are categorized as necessary are stored on your browser as they are essential for the working of basic functionalities of the website. We also use third-party cookies that help us analyze and understand how you use this website. These cookies will be stored in your browser only with your consent. You also have the option to opt-out of these cookies. But opting out of some of these cookies may affect your browsing experience.
Necessary Always Enabled

Any cookies that may not be particularly necessary for the website to function and is used specifically to collect user personal data via analytics, ads, other embedded contents are termed as non-necessary cookies. It is mandatory to procure user consent prior to running these cookies on your website.